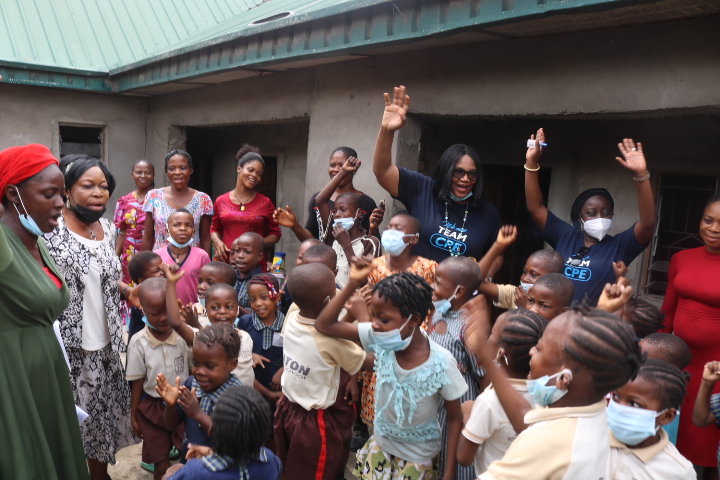 Behind the popular Apapa Road is an enclave that a lot of people may probably not know exists. It is a community of Nigerians from various parts of the country all engaged in this battle for survival.

The Concerned parents and Educators team visited some low-cost schools serving this community and it was a unique experience for everyone.

The team visited five schools in the area starting from Yaton schools.

The students and staff of the school received the team and the School owner took everyone around after which CPE members spoke to the students and presented the five selected students with the CPE school fees support fund.

The parents of the selected pupils expressed their gratitude to CPE.

The National Coordinator of CPE Mrs Kemi Koleowo stated that made the money donated is to take care of the selected student schools fees for the term.

Some of the Beneficiaries shared their experiences on how challenging it has been to raise their children through school due to lack of finances.

A parent groaned as she explained how difficult it is for her to pay the school fees of her child because her business of selling abacha is not booming and her husband is late. Another parent also shared his experience “I am a tailor, and my business is not moving since covid 19, I am struggling to survive and my wife is late I have been the only one taking care of my children”

Some teachers and school owners also spoke with the Allaboutschool NG correspondent.

Mrs Udom a teacher at Yantom school told Allaboutschool NG that she enjoys teaching because she loves children and also it’s her passion to impact children as a teacher, despite the challenges of teaching in a low-cost school. She also called on the government to support low-cost schools in the area and the need for government to provide proper orientation to parents in the region about the importance of education to their children.

Mrs Adewale Olubisi stated that her motivation for starting a school in Ilaje Otumara is because of her love for children. After graduating from school she decided to create a place for children in the community to learn. She further stated that “The major challenge we having in this area is that most parents in this community are not interested in education. They don’t value education and we need to explain the benefit of sending their children to school to them. The few parents who want to send their children to school are not financially able to do that”.

Mrs Adewale further expressed that “CPE visit to the school is a big relief to her, the parents and the school.

Another school owner Mrs Abiola Afolabi proprietor of Dan ester school expressed her gratitude to CPE for the donation and she stated that no parent will pay their children school fees at a go, they will either not pay or break the payment bit by bit”

The CPE Team was led by Mrs Kemi Koleowo, the National coordinator as well as Mrs Toyin Idowu-Sode, Board of Trustees member. Other members of the team were Mrs Arin Adebowale, Mrs Dada Ifejola, former president of AFED, Mrs Temmy Oshoba, Mr Enoch Olisa and the Edumark Team

Concerned parents and educators team took her second part of …

Puberty Stage or Something Else

Our society today has made certain things unclear to us, …