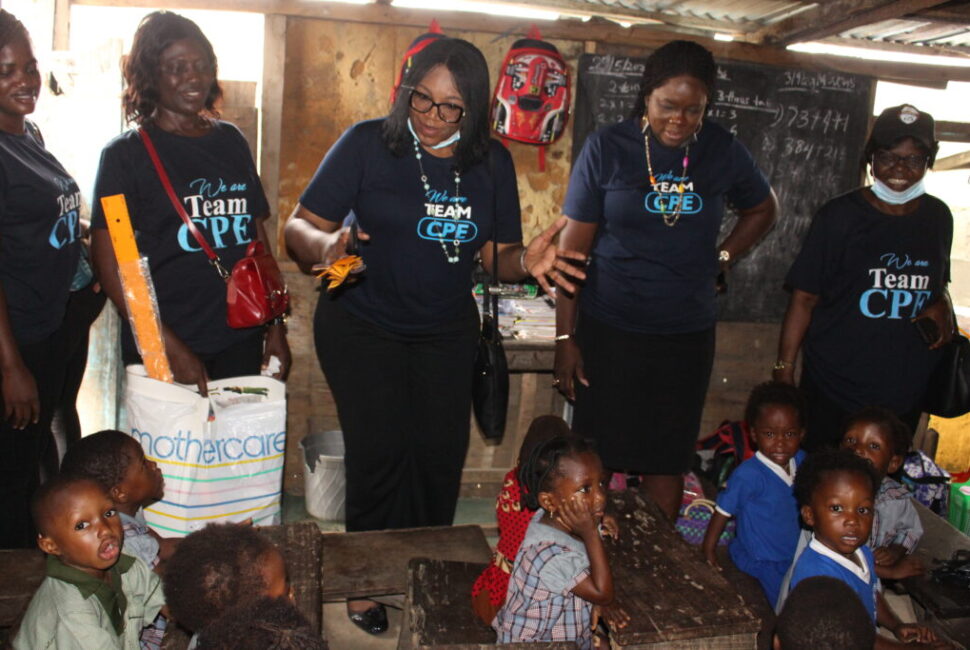 Concerned parents and educators team took her second part of the annual low-cost school visit to Ajegunle Irawo community in Lagos. The group visited three low-cost schools in that community, the outing was an amazing experience for everyone who took part. Josgad Nursery & Primary school was the first school the team visited arriving at the school, the students and staff warmly received the team, CPE members spoke to the students and presented to the school, books, school bags, and other stationaries materials. The next school visited was Goodness & Mercy Nursery and Primary school, getting to the school, the team had to cross a bridge because the surrounding is water lodged, the school owner Mrs Adetunji was happy to receive the team, CPE members interacted with the children in their classrooms and took some pictures, the team donated school books, school bags, and other stationaries materials and also presented to the selected parents of indigent students money for their child school fees from the CPE school fees support fund. The parents of the selected pupils expressed their gratitude to CPE. The last school the team visited was Prime gate nursery & primary school. Some of the Beneficiaries shared their experiences on how challenging it has been to raise their children through school due to lack of finances. A parent groaned as she explained how difficult it is for her to pay the school fees of her child despite selling biscuits and sweets to survive because her husband is late. Another parent also shared her experience “I am a single mother, I live with my parents because they don’t want me to marry the father of my child. Speaking with Allaboutschool NG correspondent, Mrs Adetunji proprietress of goodness & mercy nursery and primary school, on the challenges she is facing as a school owner in the community, she stated “one of the challenges I am facing running a low-cost school in this community is that most of the parents are poor, they will rather send their children to public school instead of a private school because they can’t afford to pay our school fees. She called on people to come around to help her and develop her school because it is not properly built, She further stated that she is afraid to leave her current; location because she fears that most of the children might not attend her school again and some might not go to school again. She thanked CPE for visiting her school. The CPE Team was led by MrsYinka Ogunde, Mrs Dada Ifejola, Mrs Biola Okeke and the Edumark Team.

Behind the popular Apapa Road is an enclave that a …

Puberty Stage or Something Else

Our society today has made certain things unclear to us, …